The company first started off with felts industry in 1997 and next with the nonwoven industry in 2000.

The felts are installed in the interior and exterior of cars (eg. car doors, bonnet) and act as heat and sound insulator. They are also installed in roofs, walls, partitions and carpet underlay.[2] For the nonwoven, they are widely used in the disposable hygienic products industry. Its application include another layer for diapers, sanitary napkins, wet wipes, and surgical apparels including caps, masks, and gowns.[2] 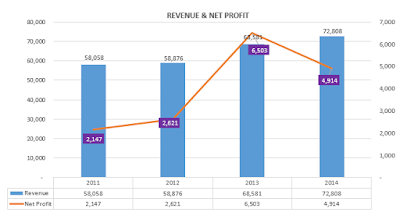 OCNCASH had a healthy net profit margin. In 2014, they had lesser profit due to one time loss on the disposal of PE Modular machine, write-off some assets and stocks in hygiene division, implementation of minimum wage and increase in electricity.[5]

From the Chairman Statement, for felts division, new factory will be completed in June 15 in Indonesia. The new second production line will be installed and commissioned during the Q3 of 2015. Next the existing first production line will be relocated to the new factory at the end of 2015. So we will expect the two production lines to be fully operational in 2016 and the revenue and the net profit to be pumped in Q1 result announced in May 2016. For the nonwoven division, Japan had emerged as a major customer. The chairman even assured the nonwoven division will have a double digit growth.[1]

To double confirm what Mr Chairman had been saying in the annual reports, i monitored their quarterly results.
Based on the findings, for hygiene (nonwoven industry), it had shown significant improvement, which is aligned to what Mr Chairman had mentioned in his annual report. Looks like double digit growth is coming!! As for insulation (felts division), the surprise will be in Q1, 2016. I assume that the new factory had been completed and now will be the relocation of the second production line to the new factory. Due to slowdown in automotive sales in Malaysia and Indonesia [6], the felts division suffers a slight drop, the net profit will be lesser but with export of nonwoven industry to Japan, it will balance off the lesser profit from the felts division.

For the regional revenue, Malaysia and Indonesia show lack of momentum. But for Japan, Thailand, and others show significant improvement due to increase in sales to Thailand and Japan in nonwoven division.[6] Up to date, the net profit for 2 quarters in 2015 was RM4,671k compared to total 2014, which is RM4,913k. The company only requires another RM0.242k to breakeven 2014's record. Please bear in mind, the exports to Japan and Thailand will be done in USD. With the current weakening of RM, this is positive for OCNCASH as net US dollar earner. The company exports about 80% of its products, which is denominated in dollar, while most of its cost (60%) is denominated in Ringgit.[3] 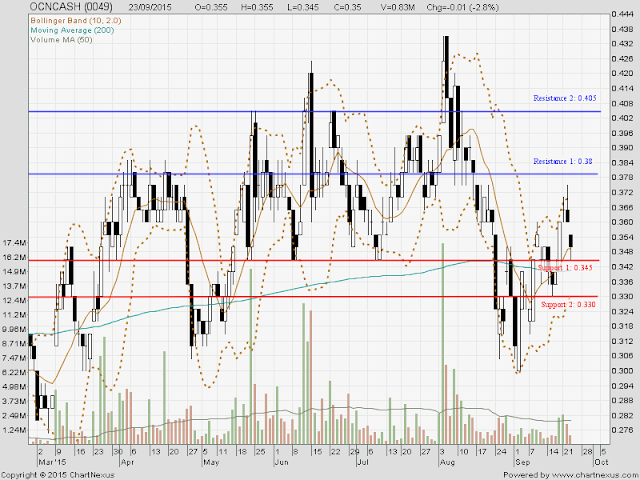 With the current unstable economy, it is advisable to go for the Risk to Reward Ratio (RRR) of 1:2, meaning to say 1 risk to 2 rewards. Remember to cut loss when your cut loss point had been triggered. There is a gap between 0.355 to 0.36, first, the chart needs to cover the gap in order to keep the momentum going. If it can break 0.36, there are a few more hurdles to go before reaching the first resistance which is 0.38.

OCNCASH is a growing ACE market with a lot of hidden potential. A transfer to mainboard is just a matter of time, perhaps one or two years later? Well, it is a very interesting company because of:
- Strong fundamental company with growing prospects
- For 2015, OCNCASH just need another RM242 to breakeven 2014's net profit record.
- Benefits from weakening of Ringgit
- Be aware of downsides of FBMKLCI and volatile global economy
- With the growing of nonwoven industry demand in Thailand and Japan, Q3 result will be bright despite the felts industry is weakening in Malaysia and Indonesia due to lower sales for automobile industry.

OCEAN full of CASH? You decide...

Let's Ride the Wind and Gainvest~

Email ThisBlogThis!Share to TwitterShare to FacebookShare to Pinterest
Labels: OCNCASH

A wind rider who utilizes fundamental and technical analysis My email is gainvestor10sai@gmail.com